Colombo isn’t only a city of the future or even the present. Many areas still belong to the past, with streets and building that take many a Sri Lankan down memory lane. If you speak to a Sri Lankan about his life in Colombo, you would most probably get a detailed comparison of the then and now of the city.

Most of the building and street names are from the time when Sri Lanka was a colony of the Portuguese, Dutch and British. Slowly, the names of buildings and roads are being replaced by more Sri Lankan names, but the people of Colombo will continue to use the more familiar names of governors, famous people and buildings that are now going to ruin.

Sri Lanka has a long history and so does Colombo. Traders from China, Greece and Arab are believed to have visited the city over 2,000 years ago. The harbor was a reason for Colombo to attract many and there were also many goods the country had to offer. In the 14th century, Moroccan traveler Ibn Batuta visited the island and is believed to have referred to Colombo as Kalanpu.

The Kotte Kingdom centered on Sri Jayawardanapura Kotte and Colombo came under the rule of the King of Kotte. The first explorers from Portugal visited the island in 1505 and an incident that took place between the Portuguese and Sri Lankans led to the proverb, ‘Parangiya Kottegiya wage’ (like the Portuguese who went to Kotte). The story behind it is that when the Portuguese landed in Galle and found out they were in Sri Lanka, they sailed to Colombo. They were then taken to Kotte, the capital, but the locals used a long and torturous route so the Portuguese wouldn’t know how short the distance was from the harbor to the capital. The proverb refers to taking the long route or roundabout way instead of using a direct route.

When the coastal area of the island came under the rule of the Portuguese and later, the Dutch, Colombo was used as the capital city. In 1796, Colombo came under British rule and Colombo continued to be the capital city of the island, which was then known as British Ceylon. We still see buildings that belong to this era and they are constant reminders of the city and also the country’s history.

While Sri Lanka gained independence from Britain in 1948, the architecture, food and culture of Colombo have been influenced by the colonial era. It is for this reason that Colombo is seen as a city that is more developed than the rest of the country and the people of Colombo were believed to be less conservative. Even today, Colombo is often the first to enjoy the new additions to the country, for instance branded and imported goods, hotels and even global fast-food chains. While there is a change of attitude now, not too long ago Colombo was home to the affluent and was the city of opportunity in Sri Lanka. 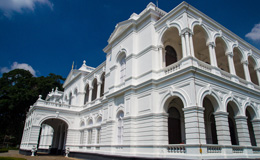 The National Museum of Colombo first opened in 1877 with only 800 exhibits showcasing some aspects of the history and culture of Sri Lanka. Today, it has over 100,000 exhibits and the most important library on the island.